The Run Down is an app designed for dog owners who live in high rise buildings to communicate passively with their neighbors and reduce the anxiety of guesswork. Owners can quickly assess how busy the dog park is and make informed decisions with their time. 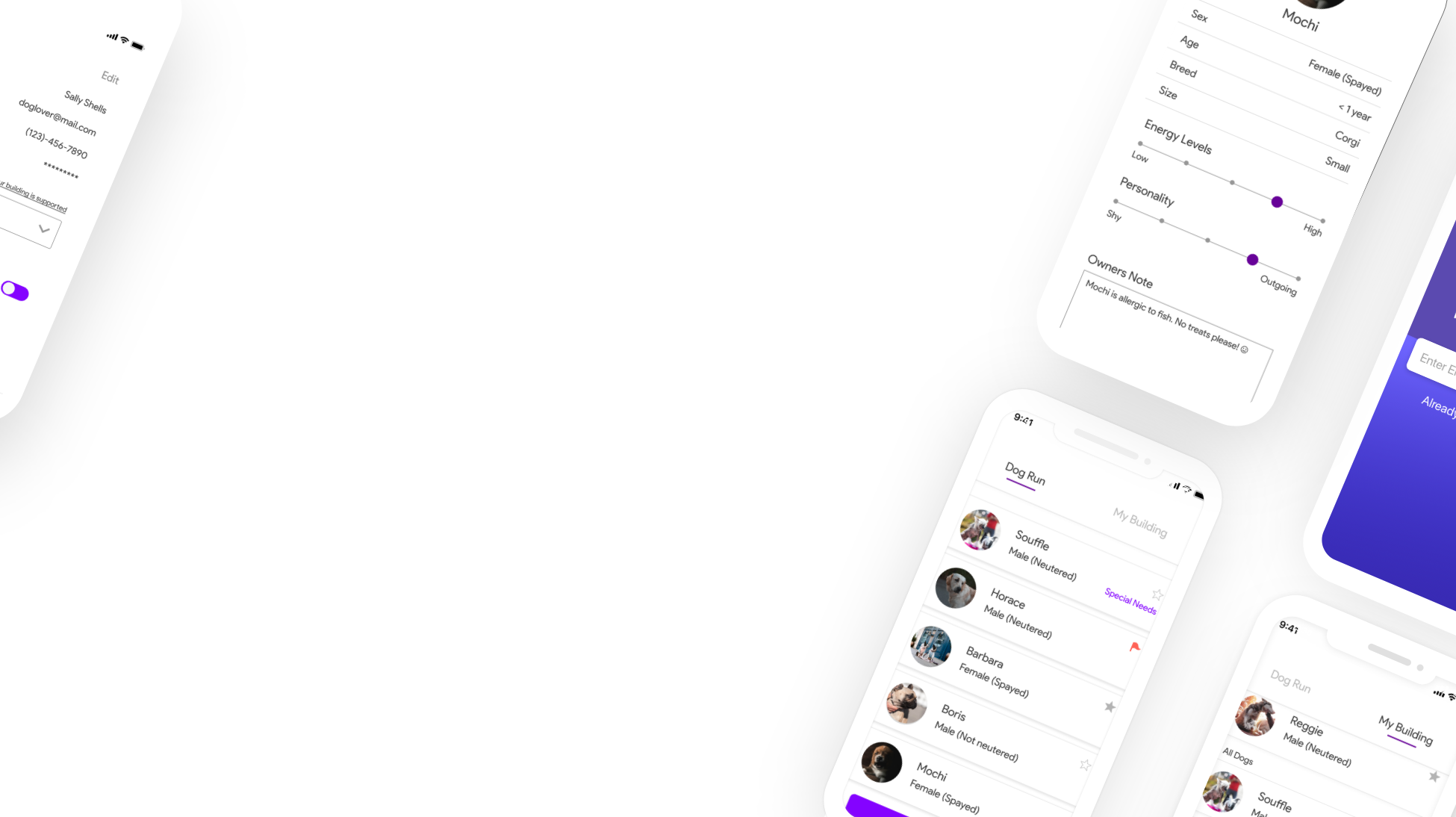 So what's the problem?

Having a shared dog run* is nice but not knowing which dogs are there results in stress and wasted time.

As dog ownership rises in big cities, apartment buildings have began accommodating dog owners with amenities like a communal dog run. These dog runs provide a safe space for dogs to exercise off leash and socialize, which helps busy owners save time and build community.

While the park is a great resource during peak use times, its occupancy is unpredictable and would usually remain completely empty for hours. Owners have no way of knowing what dogs are present, so most rely on habit or guesswork to take their dogs to the run. The average owner spend almost two hours a week sitting in the empty dog park waiting for someone to show up. This becomes increasing distressing in harsh weather conditions.

*a dog run is a small enclosed park for dogs to run off leash. Also known as a dog park, play area, and the best place in the world.

The Rundown: an app for busy pawrents

Instead of relying on guesswork, make it easy for dog owners to share data amongst themselves and take control of their lives.

Quickly see who's at the run

Users are able to immediately see a list of dogs who are at the run when they open the app. They can also switch to the building directory and search for specific dogs to gain more information.

Let others come to you

Highlight dogs that you care about

Users are given two ways to interact with individual dogs. Testing showed that users are more likely to favorite a dog and think more deeply about flagging. This is why the flag option is buried within the dog's profile.

I had biases from personal experience, so I decided to interview outside of my immediate group of friends. I interviewed four dog owners from my building and three from neighboring buildings to better understand how they make decisions throughout their day. 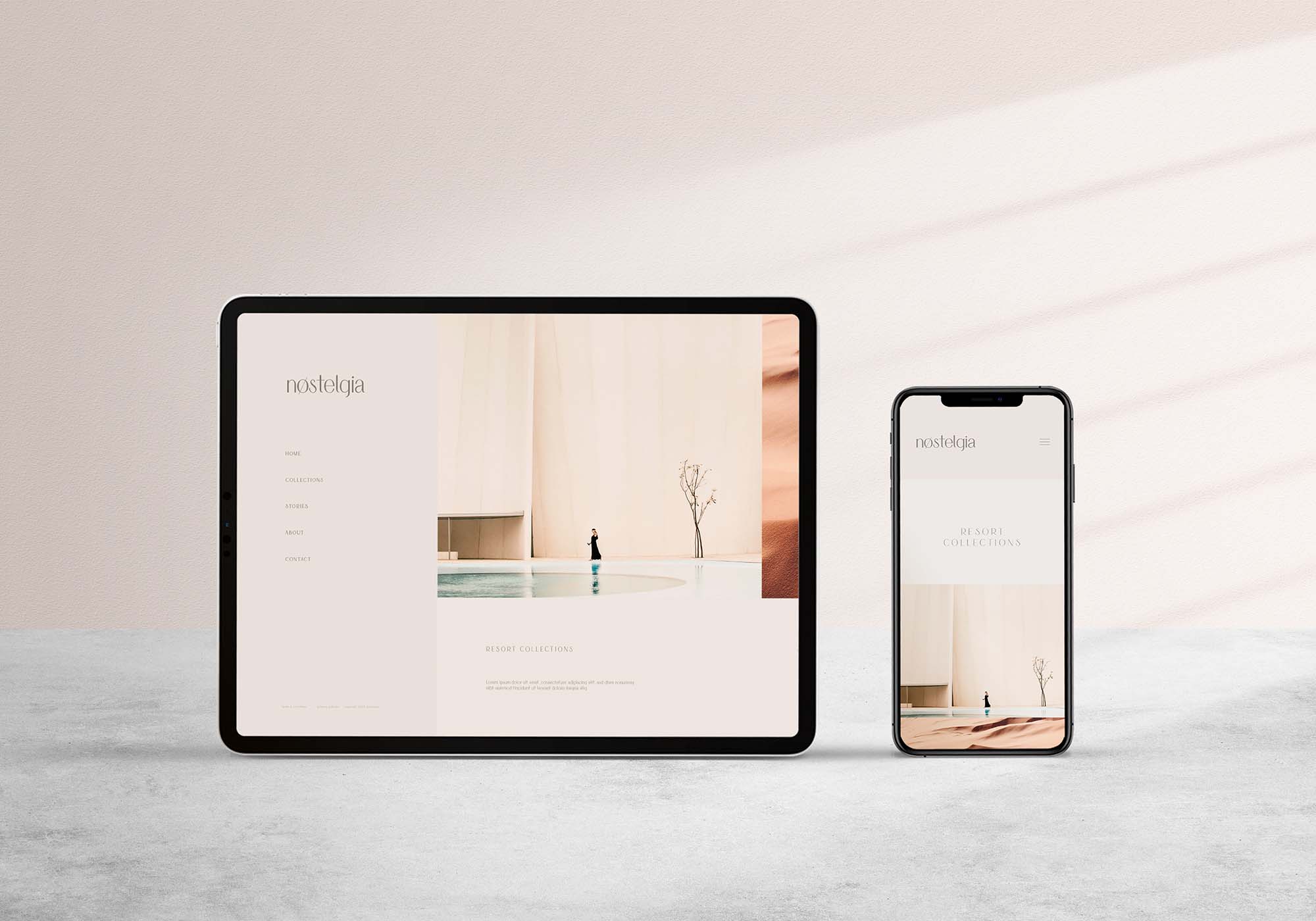 With the data gathered from the interviews, I identified two main groups of target users. I created two personas and mapped both of their journeys to increase empathy. Since their pets also played a central role in their experience, I also created pupsonas to demonstrate how their relationship can impact their decision making. 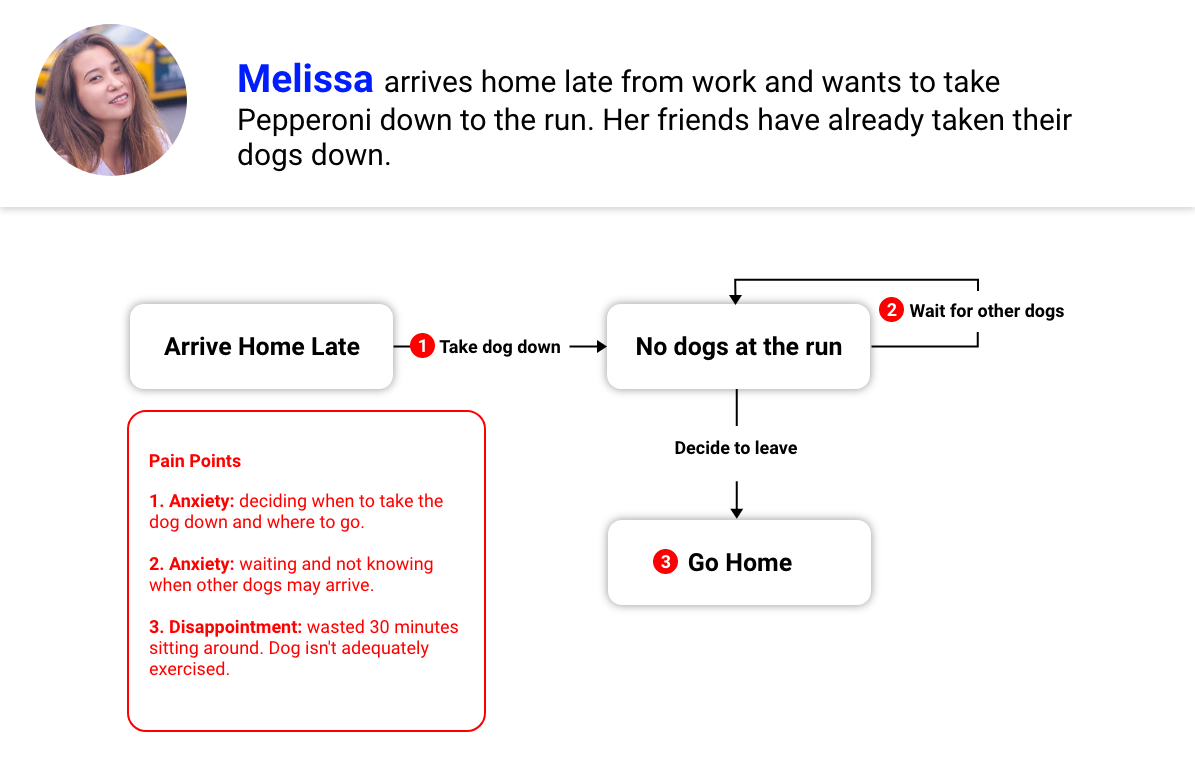 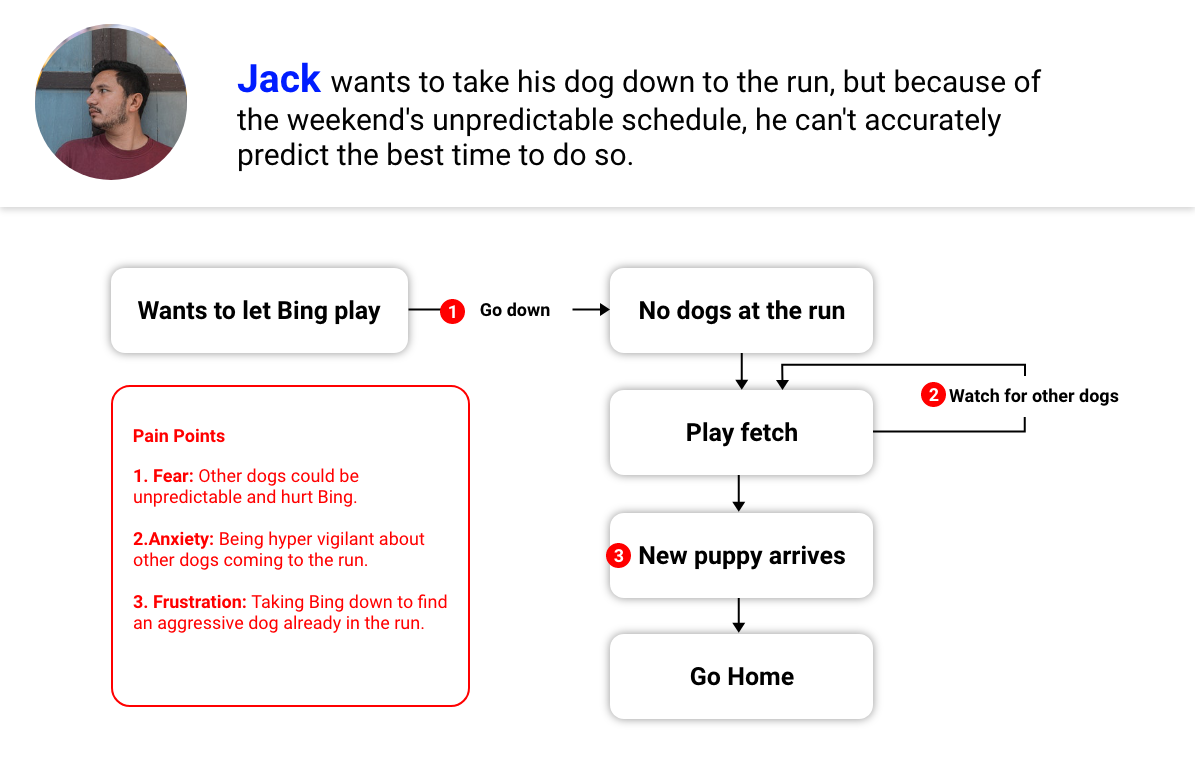 The research was clear about what users wanted at the end of the day: a quick and unfussy way to see who's at the dog run. However, there are also times when the user might want to learn more about another dog, either because they've never met before or because of an outstanding encounter.

On the flip side, owners also want to broadcast information about their dog. Letting others know what their dog likes or dislikes would help prevent dangerous encounters between incompatible pups and even attract like-minded dogs and their pawrents.

1. Let busy/tired folks quickly figure out when to take their dogs down.

2. Give anxious folks the control to avoid unwanted situations.

3. Provide social folks and pups opportunities to meet and mingle.

How can we create a digital window to the dog park to remove the anxiety of guesswork?

Product Goals
1. Efficient Visibility : Let users know who's at the dog run at a glance
2. Communication : Give owners the platform to provide additional information about their dogs personality to avoid potential conflicts 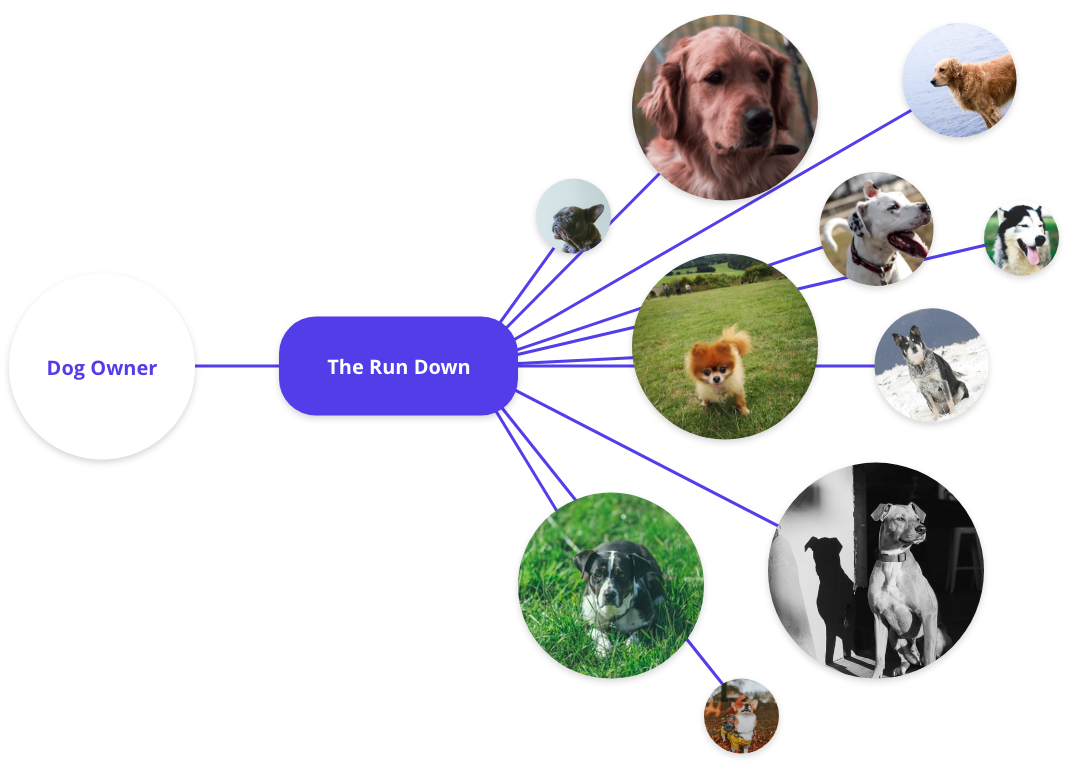 Making sure I understand the story

After deciding to design a mobile solution, I created a storyboard to get a better sense of how the user might interact with this app and how it might make them feel. This helped me identify what functionality I want to include. 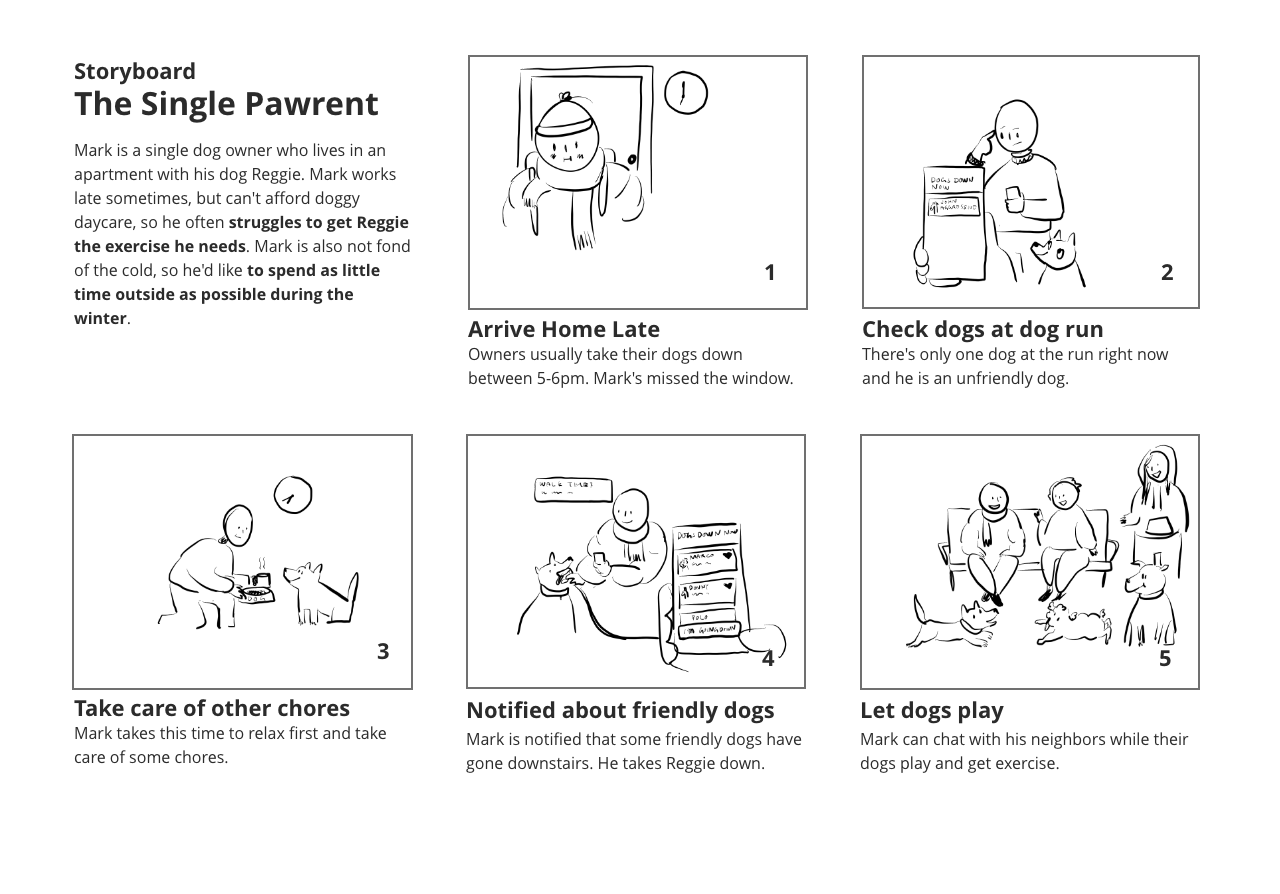 Using the storyboard as a foundation, I built out the app's architecture to map each screen's relationship. 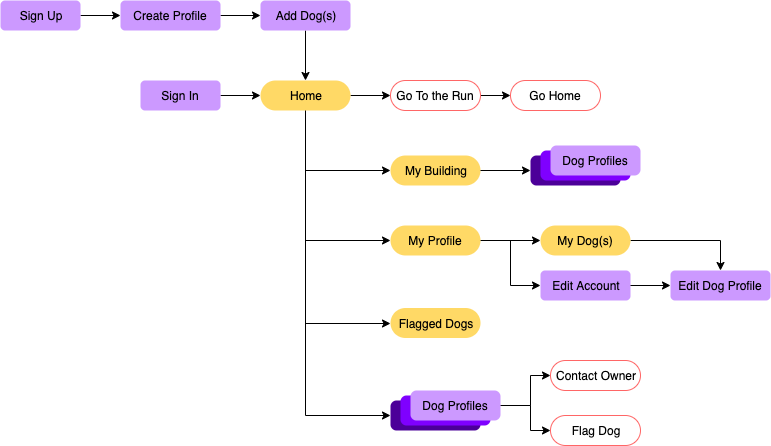 Sketching out the designs

I drew screens on paper to quickly figure out what screens needed to be made and what information needed to be visible.

I focused on designing for users who are looking to use the dog run after coming home from work. 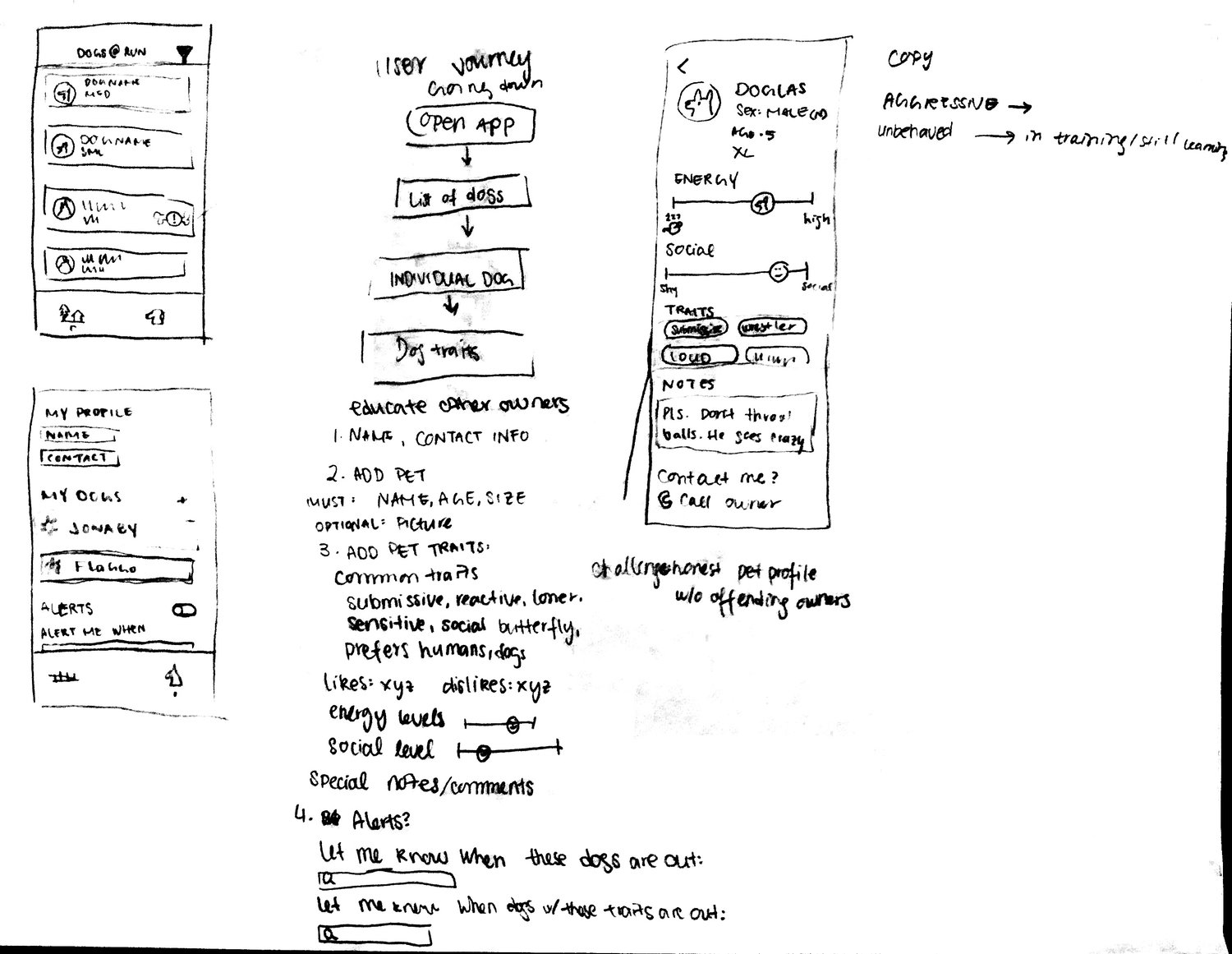 In addition to the general use case, I also designed an onboarding flow. Because each dog's profile is so detailed, I want to make sure that it can gather the data it needs without being overwhelming. 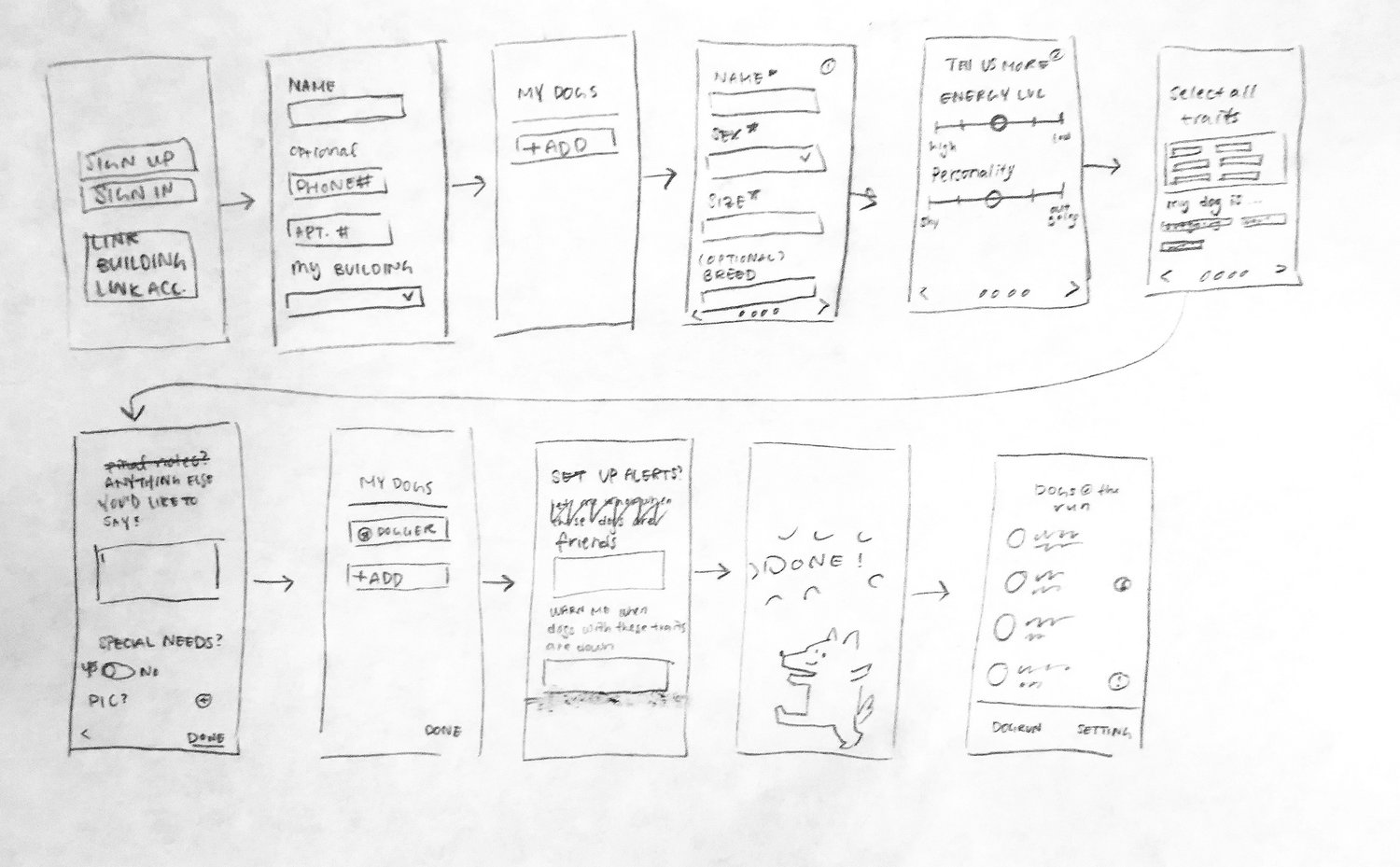 After I felt confident with the layout and data, I translated my designs into low-fi wireframes on Adobe XD. 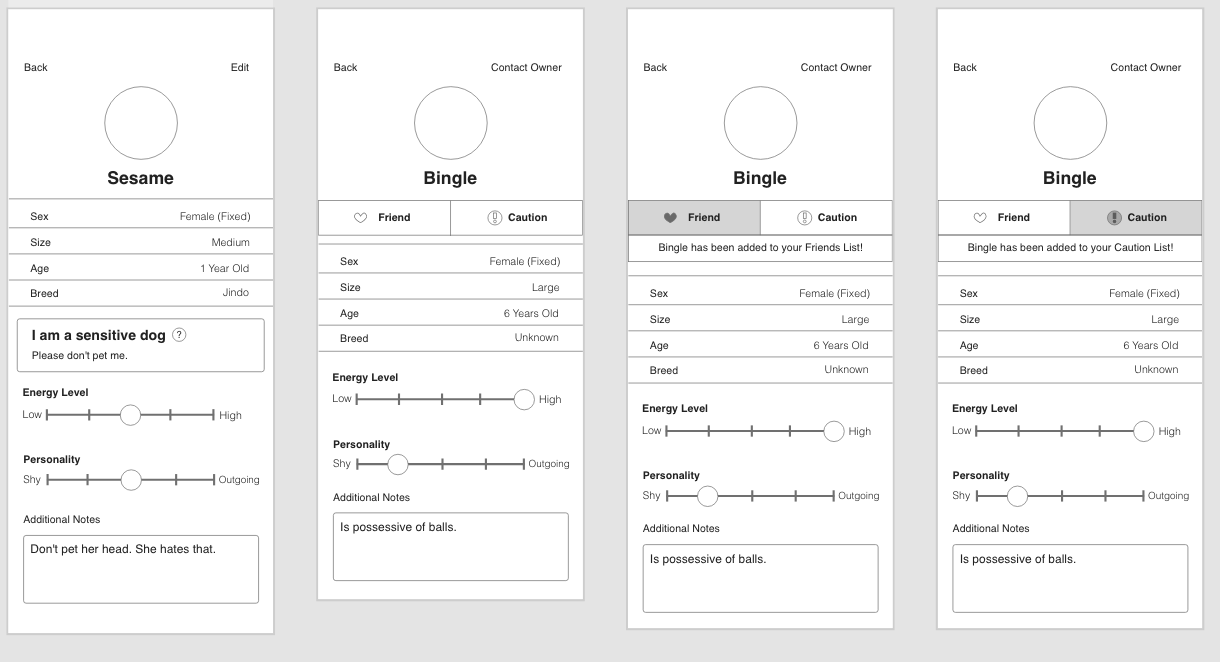 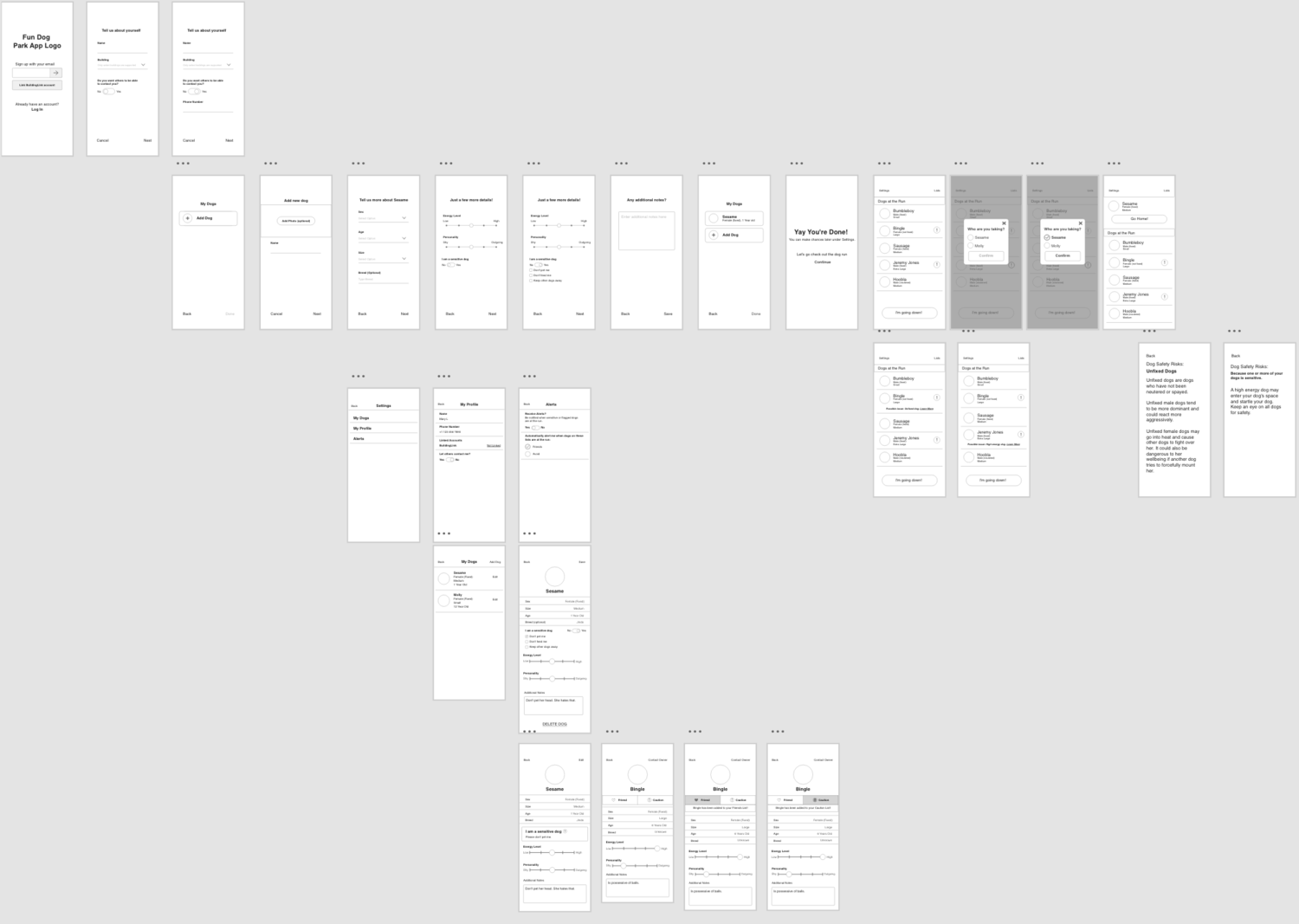 Some of the language used such as "flagging" made users hesitant to use certain features because it may offend others.

Users expressed concern that they may forget to use the app during regular hours.

The Run Down provides a real time link from the user's pocket to the dog owning community of their building. 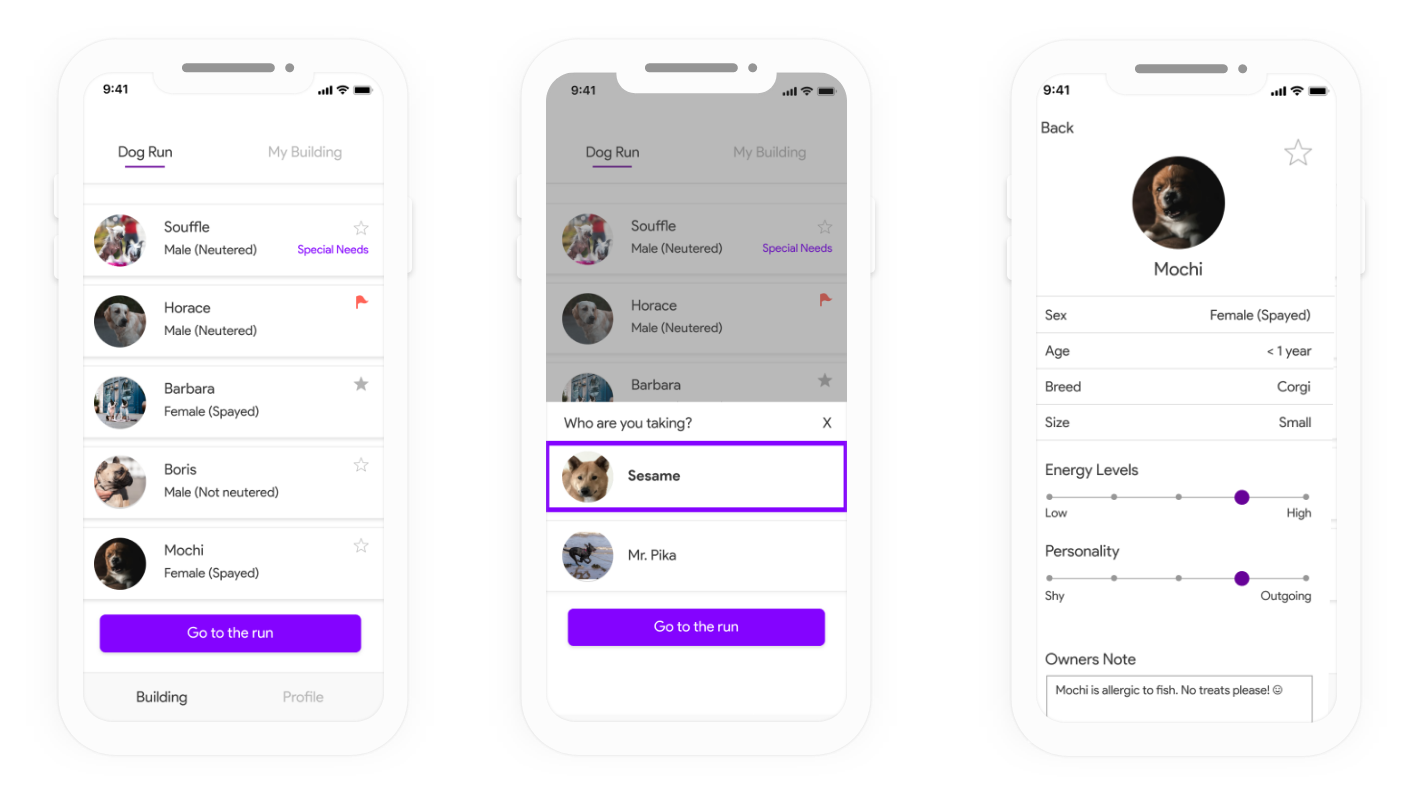 I also planned future features for this app's growth:
1. Keycard integration: automatically mark users as "at the run" when they swipe their keycard to access the run.
2. Smart notifications: using AI, notify users about suggested walk times.
3. Walk time tracker: Keep track of your play time and create a chart to help users track their dogs' exercise.

This case study is a labor of love that stems from my own experience trying to coordinate playtime at my building's dog park. Since it was so close to my personal life, I was challenged to separate my existing assumptions from the real data through research.