Improving ownership in collaborative document writing
OVERVIEW
This project is my final project at the School of Visual Arts Summer Intensive program. The task was to take something that I used daily and add a function to it. I chose Google Docs because it is a major part of my daily life. It is the standard platform at NYU for collaboration, but works better as a standalone piece of technology. I wanted to explore how users can take advantage of its power to work together more efficiently.

Working collaboratively on documents isn't the same as writing by yourself.

Google Documents is a staple in collaborative document writing. It allows teams to contribute to a single document, often at the same time. However, users still use the document as if they were the only writer, breaking focus and disrupting workflows.

Help users collaborate without stepping on each others' toes

I designed a focus mode for collaborative document writing, which allows each user to take ownership of their assigned section and work in relative privacy without leaving the shared document.
‍

Ask the right demographic about their collaborative experience

I conducted a screener survey of anonymous Google Docs users through Survey Monkey to better narrow down the target demographic. I found that most Google Docs users who use Google Docs professionally were between the ages of 18-35, with an equal proportion of students and office workers, with an outlier population of educators. 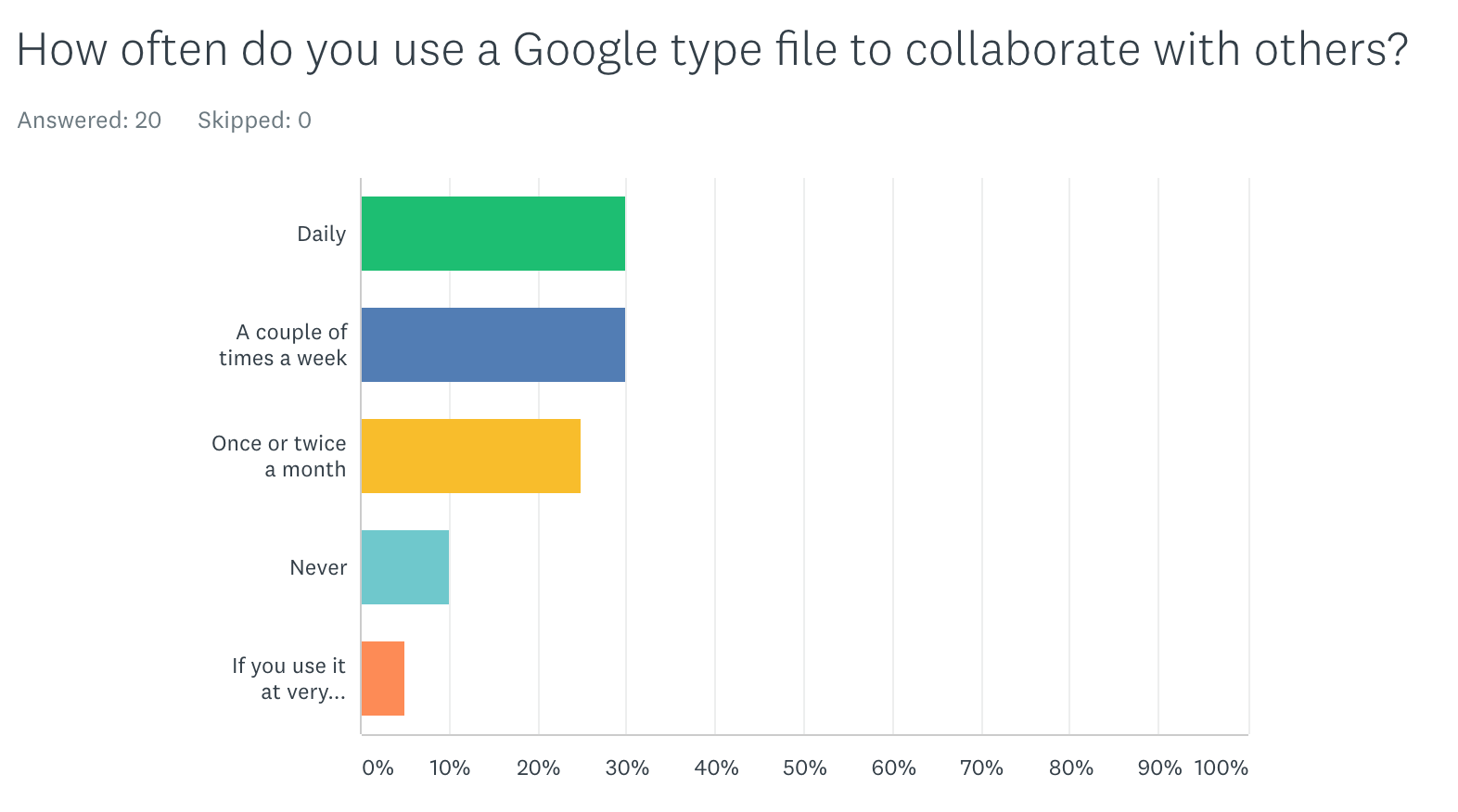 Through the survey, I realized that users love Google Docs for its dynamic and collaborative nature, but desired the personal space that they need to concentrate on their own portion.

I then conducted interviews with two students and a project manager to understand their experience when writing documents. I also conducted a competitive analysis with Dropbox, Huddle, and Microsoft Word (Online). 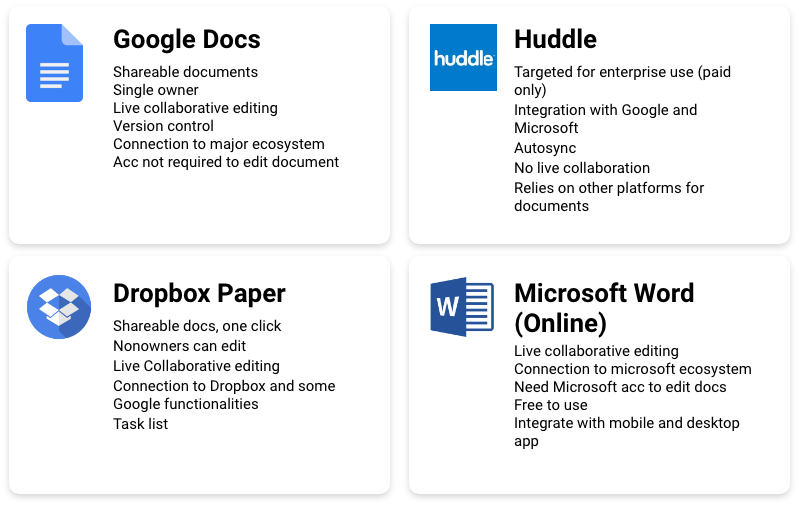 The project manager and the university student

Using the data I've gathered, I created two personas to represent the main Google Docs users that I want to design for. While their goals are  aligned, their work process tend to differ quite a bit. Students tend to care a little less about formatting and more about keeping each contributor accountable. On the other hand, professionals trust each other to get the job done, but prefer to take control of formatting themselves. 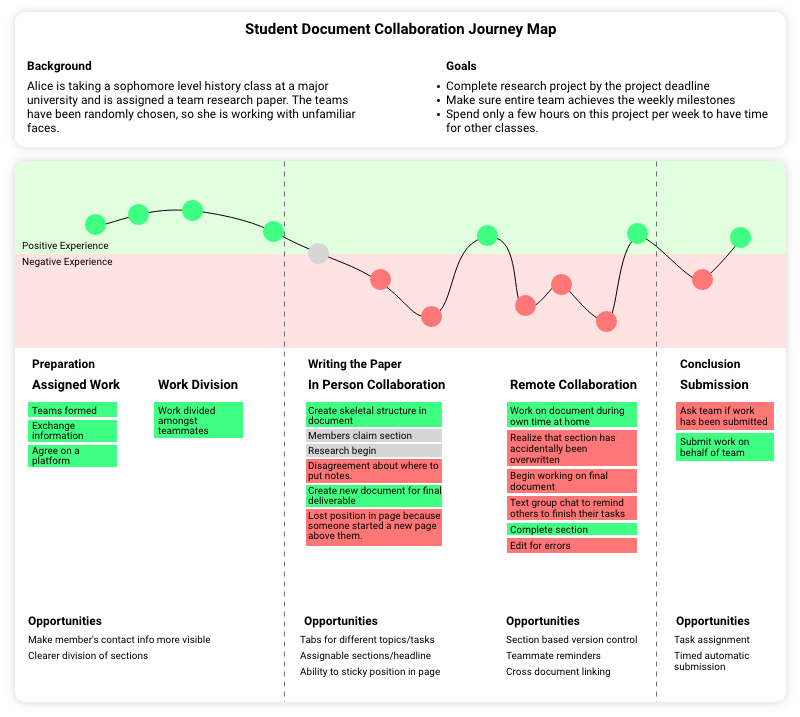 Collaborative writers need control over their workspace when writing with others. 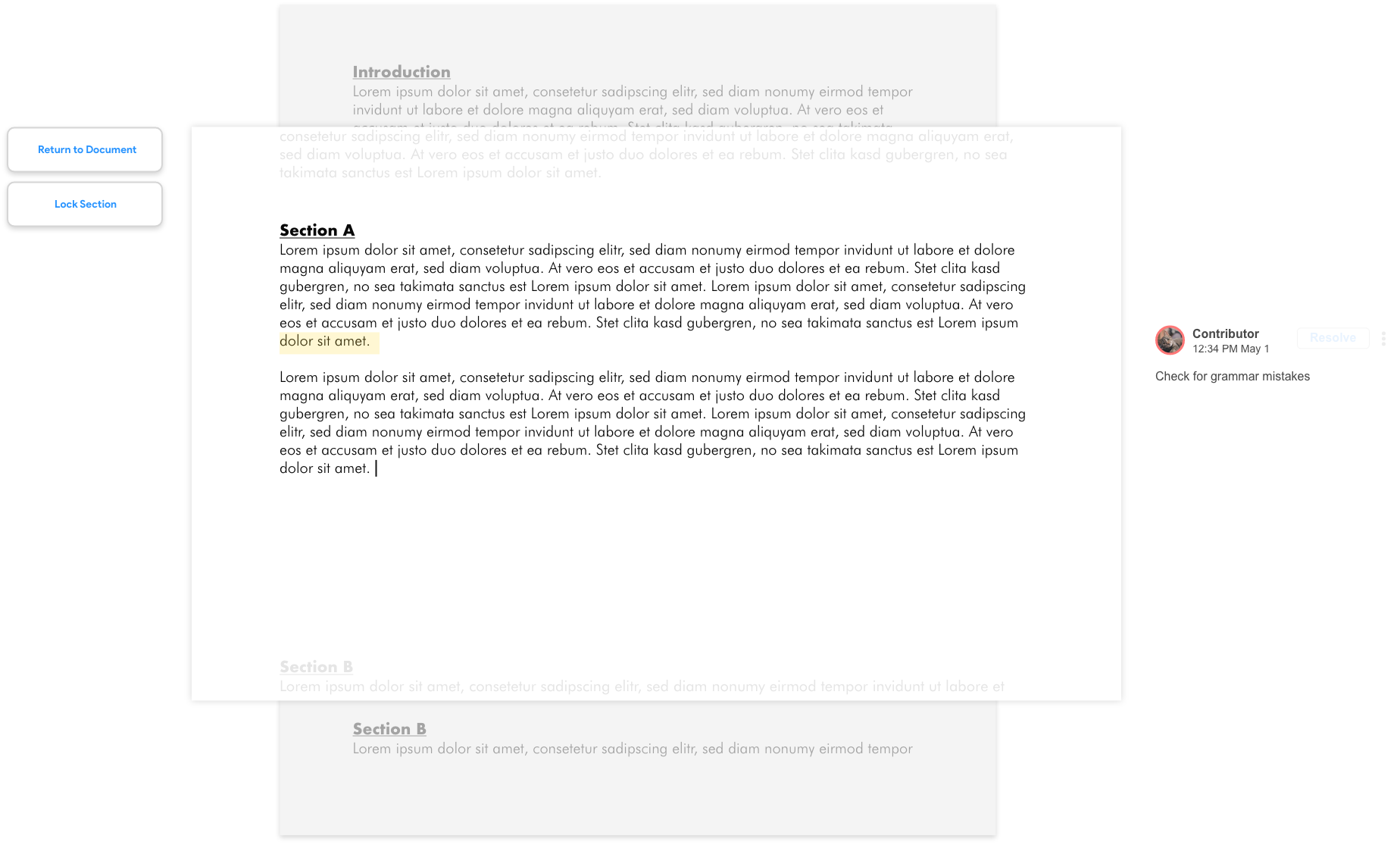 My solution stems from the natural segmentation of the document that arises from group document creation. Users rarely type in the same paragraph as each other, preferring to stay within their own page. In addition to each user's "claimed" space, users also tend to create a new document to use as a draft.

When actively collaborating, people still tend to forget that others exist and work as if they're writing in an offline document. Instead of reminding them to be courteous, I chose to work with their existing mental model and let them create boundaries to encourage their workflow. 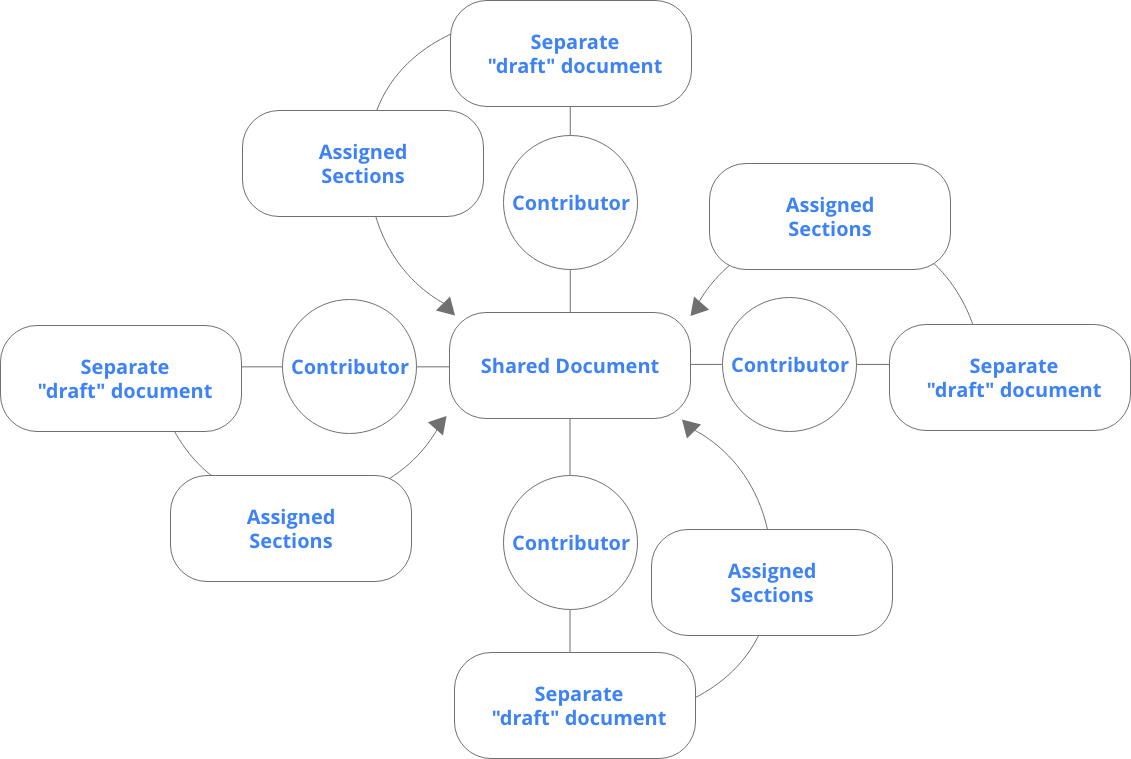 Students and professionals both exhibit this behavior, which indicates an overall desire for a personal workspace within the main document. Many surveyed users also used keywords such as "section" and "assign" to describe their work style when collaborating.

Using the most viable solutions, I created a series of prototypes and conducted A/B tests to see how well each helped increase focus and prevented errors. 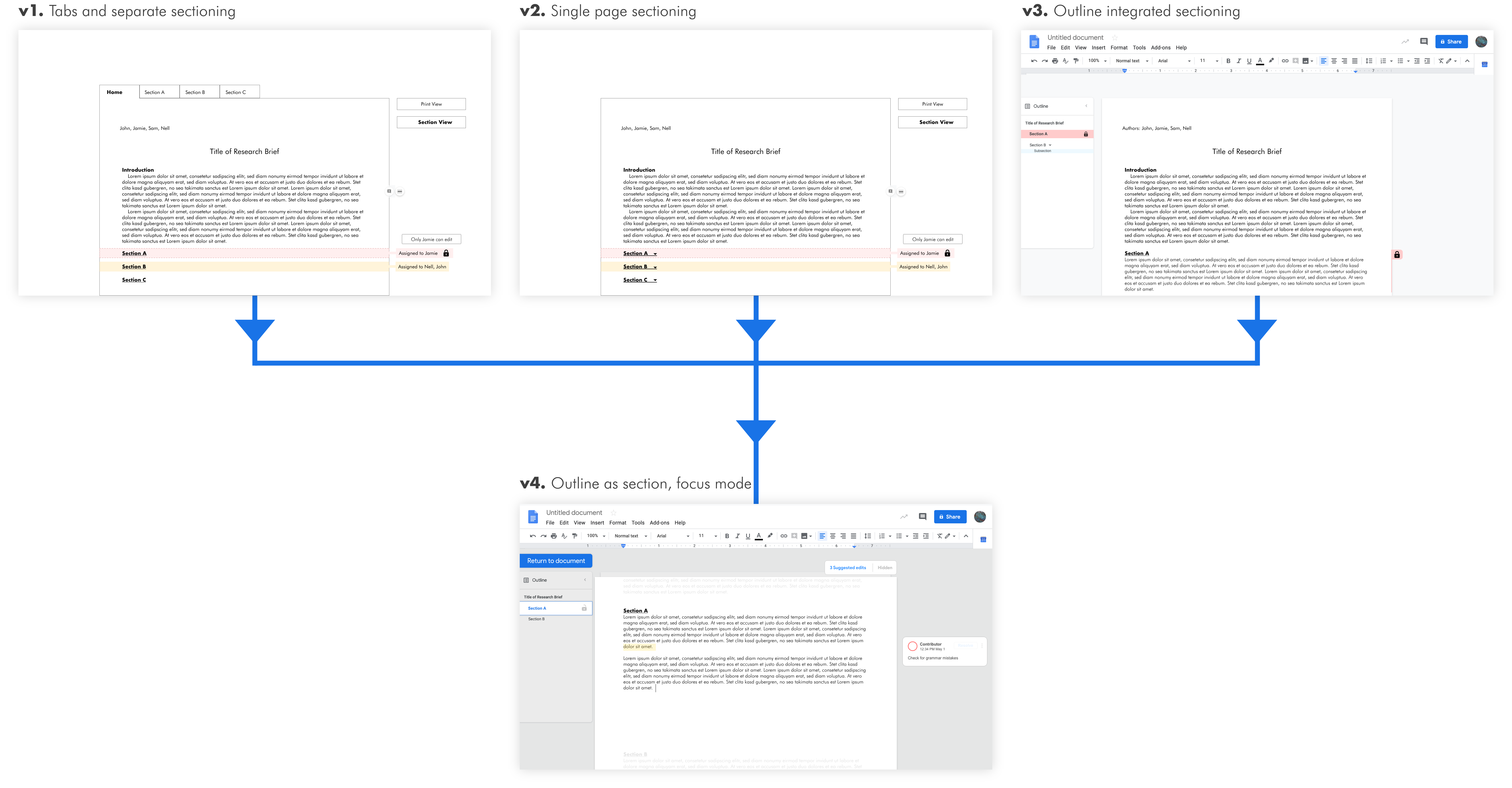 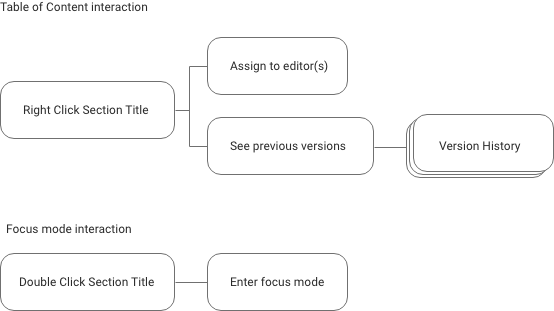 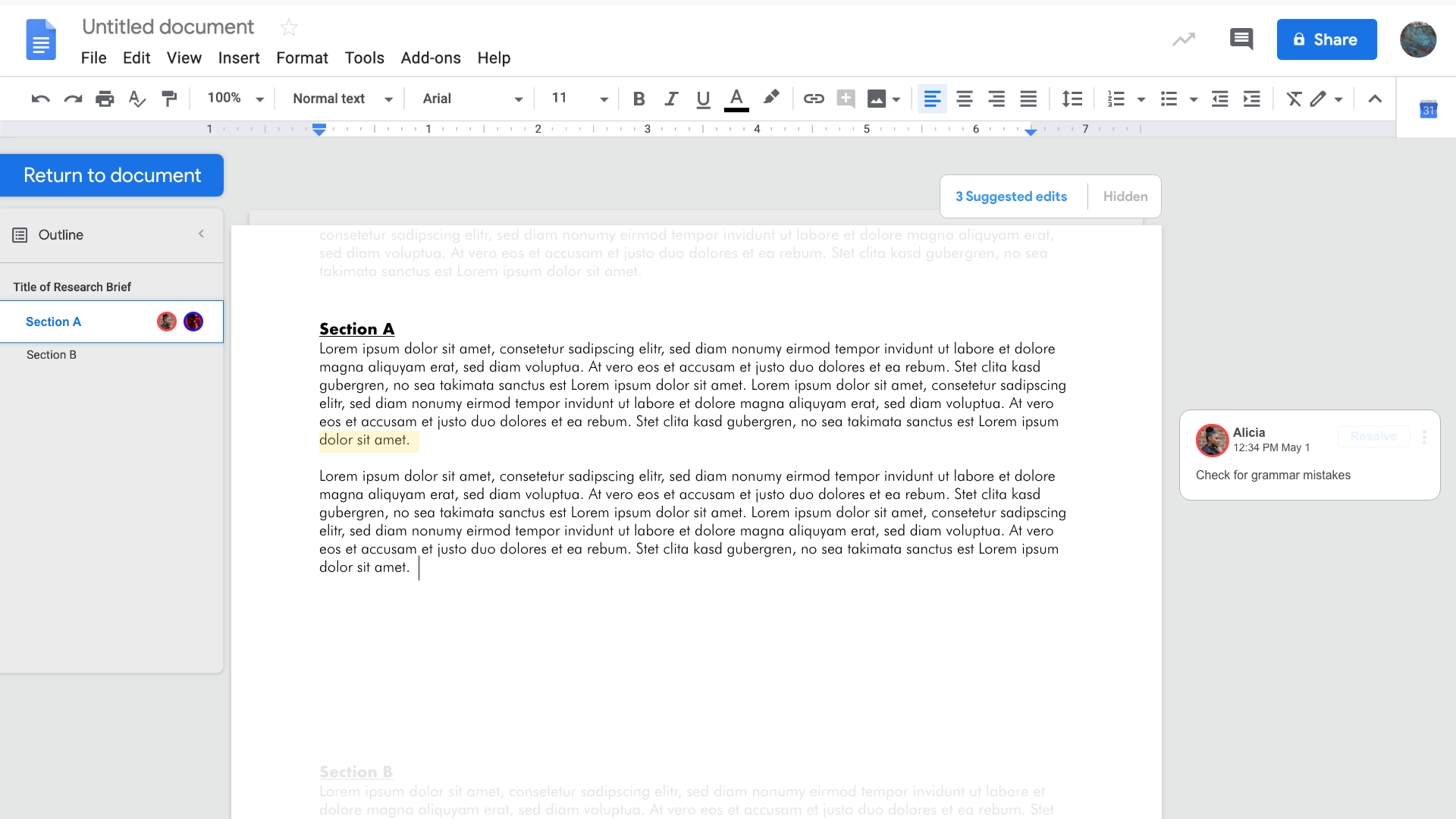 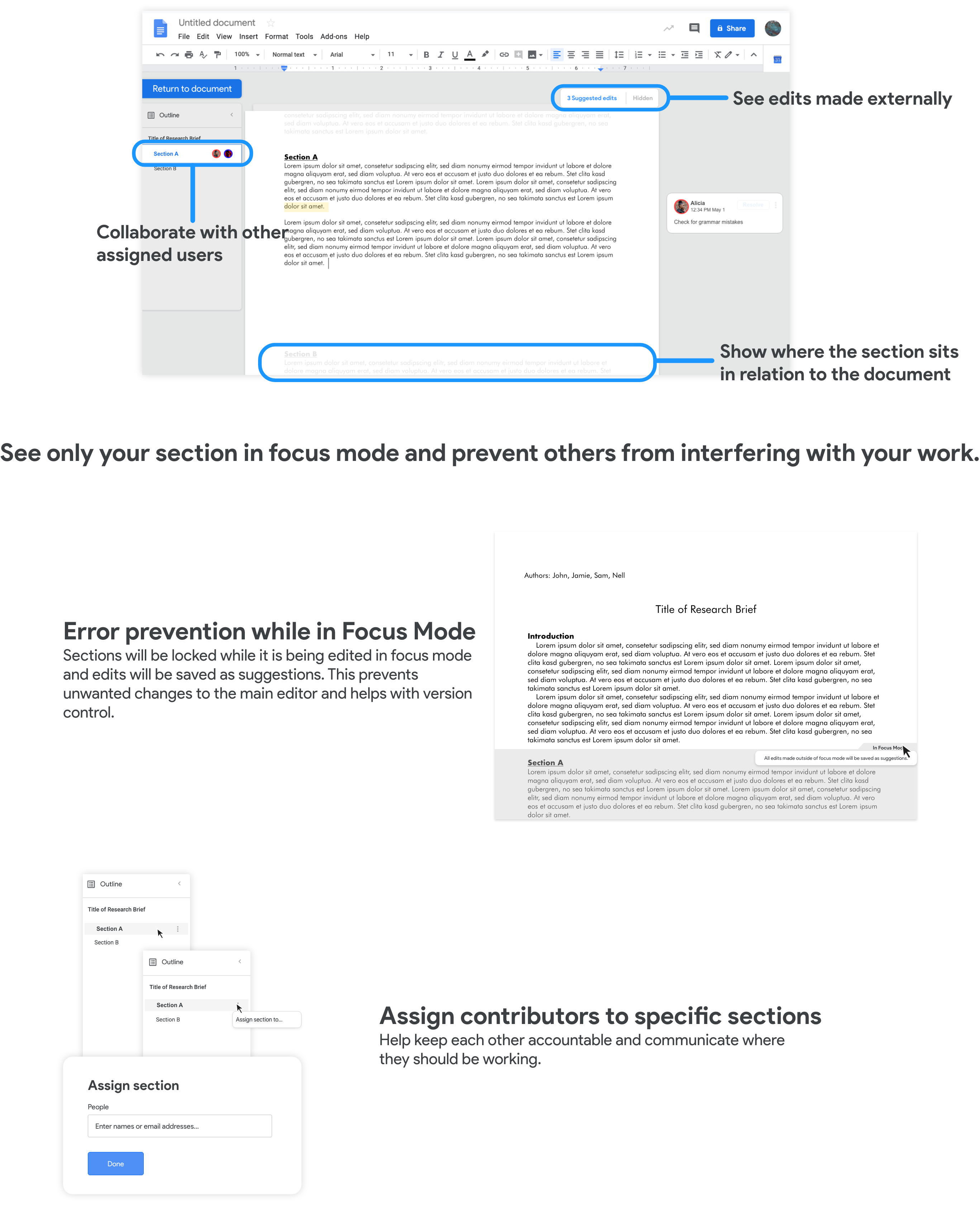 Problems transcend demographics. I worked on this project as a college student and expected working professionals to have vastly different work styles. After conducting my interviews, I was surprised to realize that most people treat Google Docs with the same mindset, resulting in the same problems. I also realized how important it was to understand the user's mental model, which restricts their relationship with products. Working with, instead of against, their mental model helped create a more pleasant experience for users without needing to introduce new complex functions.
‍